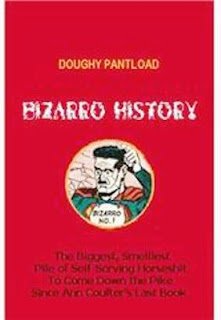 One of the ways that Jonah Goldberg's Liberal Fascism connects liberals to fascism is by trotting out various left-wing figures of the 1920s who were unduly impressed by Mussolini or Hitler or the fascist movement's dynamism. The facsist appeal, he claims, was to socialist fellow travelers.

But as we've demonstrated, the fascist route to power was not by competing for political space on the left but by occupying that of the right. Fascists may have adopted various socialist appeals as part of their revolutionary backgrounds, but the way they obtained power was also clear: by forging financial alliances with business capitalists and social conservatives and essentially contracting out to them as their thuggish enforcers, violently attacking and destroying every vestige of "progressive" or "leftist" reform in their paths. That is, they became fully creatures of the right.

And this was so especially after they obtained power. The business capitalists like Fritz Thyssen who had been early supporters of the Nazis were rewarded with heavy investment in the Nazi war machine, and so in the 1930s large numbers of captains of industry invested likewise -- including those from the United States, such as Henry Ford (though, in the case of Thyssen notably, some of them later came to regret it).

One of the foremost of these was a fellow named Prescott Bush -- the grandfather of the current occupant of the White House. (Notably, Goldberg has snorted dismissively at this point in the past.)

And in Liberal Fascism, he omits any discussion of this -- though he does paint Prescott Bush in an interesting light (p. 310):

In 1984 the former Republican strategist Kevin Phillips wrote Staying on Top: The Business Case for a National Industrial Strategy. [DN note: At the time that Phillips wrote this, he was still very much a current Republican strategist.] “Businessmen,” Phillips warned, “must set aside old concepts of laissez-faire … it is time for the U.S. to begin plotting its economic future” on a Third Way course. [Note: Phillips never uses the phrase “Third Way.”] Amusingly, Phillips has also argued that George W. Bush’s great-grandfather S.P. Bush was a war profiteer because he served on Woodrow Wilson’s War Industries Board, the very model of the system Phillips advocates.

Actually, what Phillips writes in American Dynasty regarding Prescott Bush touches only briefly on the matter of the War Industries Board (which was largely a corrupt operation in any event) and focuses primarily on the factually well-established matter of Prescott Bush’s financial dealings in helping to funnel American capital into the building Nazi war machine of the 1930s (pp. 38-40). In pp. 40-41, he concludes:

It is almost as if these various German embroilments, despite their potential for scandal, were regarded as unfortunate but in essence business as usual. Or more plausibly, that at a high governmental level, such roles were unofficially reclassified as an intelligence function — a “tell us what you know about Germany” obligation, Those in the American legal and financial community who had decades of experience with Germany and well-placed connections there doubtless were considered to be important wartime national security assets, however questionable some of their overseas dealings. In any event, a surprising number of the descendants of the men who had dealt with Germany — William S. Farish III, William Draper III, and Josepher Verner Reed Jr. (grandson of Remington Arms chairman Samuel Pryoy, earlier a director of both UBC and American Ship and Commerce) — turned up as close personal advisers or high-level appointees in the George H.W. Bush administration.

As you can see, Phillips’ criticism of Prescott Bush (and by extension, the Bush family) was much broader-ranging — and ranges right into a fact (that American capitalists were some of the most enthusiastic financial supporters of the Nazi regime) that tends to undercut Goldberg’s claim that the Nazis were primarily left-wing socialists.

Phillips examines much of the same historical material we discussed back in 2003 regarding Prescott Bush, and reaches largely the same conclusions. As I wrote back then:

The claim that some of Prescott Bush's assets were seized under the Trading with the Enemy Act for his dealings with Nazi Germany has been thoroughly documented. Here, for instance, is a copy of the 1942 Vesting Order naming Bush, among others.

Michael Kranish at the Boston Globe discussed this in an April 23, 2001 piece titled "Triumphs, Troubles Shape Generations," that explored some of the Bush family's past troubling connections. It began like this:

Prescott Bush was surely aghast at a sensational article the New York Herald Tribune splashed on its front page in July 1942.

"Hitler's Angel Has 3 Million in US Bank," read the headline above a story reporting that Adolf Hitler's financier had stowed the fortune in Union Banking Corp., possibly to be held for "Nazi bigwigs." Bush knew all about the New York bank: He was one of its seven directors. If the Nazi tie became known, it would be a potential "embarrassment," Bush and his partners at Brown Brothers Harriman worried, explaining to government regulators that their position was merely an unpaid courtesy for a client. The situation grew more serious when the government seized Union's assets under the Trading with the Enemy Act, the sort of action that could have ruined Bush's political dreams.

As it turned out, his involvement wasn't pursued by the press or political opponents during his Senate campaigns a decade later. But the episode may well have been one of the catalysts for a dramatic change in his life. Just as the Union Banking story broke, Bush volunteered to be chairman of United Service Organizations, putting himself on the national stage for the first time. He traveled the country raising millions of dollars to help boost the morale of US troops during World War II, enhancing his stature in a way that helped him get elected US senator. A son and grandson would become presidents.

But in evaluating the evidence, it was also fair to conclude that there was no evidence of actual fascist leanings on the part of Prescott Bush, as I noted back then:

It is clear that, while the Bush/Walker clan was utterly conscienceless in its dealings with the Nazis, and at least a substantial portion of the Bush family's fortune is in fact built upon that blood-tainted business, there is no evidence that they had any serious ideological ties to them. In a literal sense, of course, it is silly to refer to them as "Nazis," since one had to be a German citizen and join the party to earn the name factually. But even in the generic ideological sense, the evidence of even an affinity, let alone an identification, with the Nazi ideology is very thin.

The problem was something much larger, and remains with us today:

What is essential to remember is that, historically speaking, fascism has only ever taken root as a genuine political power when it has formed an alliance with mainstream corporatist conservatives. While proto-fascist elements have had their moments in the sun in America -- particularly the ascendant Ku Klux Klan of the early 1920s -- they have fallen short mainly because the nation's corporatist conservatives have not deigned to ally themselves with them. This was not true in Germany or Italy, where corporatists such as Fritz Thyssen were all too happy to ride the fascist tide until it began to reveal its true nature and turn on them -- by which point, of course, it was all too late to do anything about it.

In that respect, today's mainstream corporatist conservatives -- and I think it is clear that not only President Bush but the bulk of his administration fit that description -- do not resemble Hitler and the Nazis so much as they resemble the Thyssens and Hindenburgs, the fools who believed that by co-opting their nation's growing extremist contingent, they could control it. And they resemble the Prescott Bushes and Averell Harrimans who only saw the chances for increased profits and consolidation of their power in underwriting the Nazi military machine. In the process, they all combined to unleash one of history's greatest nightmares.

... This really is why the questions around the Bush family's connections to the Nazi regime are relevant today. The episode does not point to some secret ideological affinity for fascism so much as it reveals a willingness to empower them if it furthers their ends. The really interesting question raised by the "Bush-Nazi connection" is not so much a hidden skeleton in the family closet as what the episode says about American society's willingness to ignore inconvenient truths of history, and how that affects the ethos of current public policy.


Or, as Phil Leggiere put it:

This evidence is only partly about the Bushes. More significantly, it traces the origins of the cavalier, amoral relationship between American and global financial elites and genocidal dictatorships that has characterized U.S. policy for decades.

It's clear that Jonah is not interested in discussing this reality -- his previous wave-of-the-hand dismissal is pro-forma for movement conservatives. But anyone interested in the bigger historical picture and how his thesis fits might consider it worth their while.

[Image courtesy of the Realist.]
David Neiwert at 2:49 PM
Share